Your Ford is a prized possession. Losing the car keys is a horrible occasion. We replace lost car keys. On the job or at home. We come to you! Lost key replacement is easy and affordable. Prices are much lower with our locksmith, than having the vehicle towed to the dealer to pay their prices. We come directly to your location to unlock your car door, decode the lock, and cut from code, a brand new factory key, just like the one you had before...you know... that thing happened. Our keys are guaranteed to work. Our licensed & insured, certified locksmiths have years of experience working with Ford Locks and Immobiliser Systems. Wait Wait Wait...Decode my lock... is that fancy locksmith speak for tear it up?

We understand your concern. Forgive us for throwing jargon at you. To decode a lock, basically means you read it. Each ford lock is comprised of a series of arranged wafers in a cylinder. The wafers inside the lock are of special sizes. Our locksmiths have special tools that allow us to safely "read" these numbers inside the lock. This allows us to get the "code" to your lock. Furthermore, this permits us to generate exactly the key you need, without any need for filing, or total ignition replacement. A lock cylinder replacement is much more costly than simply cutting a new key when all keys have been lost. See? Decoding is nothing scary. Our locksmiths take care of your vehicle. We treat them as our own. Don't change your ignition if you don't need to! Give us a call for lost ford keys if you change your PCM! When the locksmith decodes the door lock on your Ford Car or Truck, he uses a special tool. This tool will allow the lock to be picked open. If the keys are locked inside, that's great. If you are not so fortunate and all keys are lost to your vehicle, fear not. With the same tool, the locksmith is able to "read" the lock. This lets the locksmith determine how to cut the appropriate key blank to fit your Ford door lock and ignition. Your lock will not be damaged by this procedure. The lock will function normally. With this method, our locksmith will have a key ready in minutes. The locksmith will need to calculate the appropriate cuts. He or She will then cut a key. Once a working key has been cut, we will then program the transponder chip.

Lost keys to a modern vehicle are likely to be expensive. Should you choose to have your vehicle towed to the dealership, and then proceed to pay an incredible amount of your hard-earned money for a replacement set of keys to your Ford motor vehicle? Smart customers know that they can get a deal online. Few expect to find the same deal through a local locksmith. Finding a service provider to program car keys and remotes purchased online can be difficult. More often than not, the dealership will opt out of programming these keys which are not bought from them. Purchasing the correct transponder key, remote, or fob, specifically for your vehicle is a breeze with UnlockItForMe's team of professional vehicle locksmiths. Your vehicle security professional will arrive quickly to save you time and money. If you have lost your keys, transportation can be an issue. UnlockItForMe vehicle security professionals remove the need to bum a ride or catch a cab. Additionally, having your vehicle towed due to lost or broken keys is not a requirement! If you have lost or broken the key to your Ford and need a duplicate key or spare key please give us a call. If you have lost all keys to your vehicle, we cannot make a duplicate, but instead would need to do what is called "originate" a key to your vehicle. Rest assured, in either case, we've got you covered. Don't overpay by hundreds due to losing the keys to your Ford, Lincoln, or Mercury vehicle. The Locksmiths at UnlockItForMe are ready to serve your lost key replacement needs.

Many Ford cars and trucks manufactured in 2015, 2016, 2017, and so on are not equipped with traditional car keys. So-called smart keys or fobs have some misinformation surrounding them. If you were led to believe that because your Ford does not use a traditional ignition with a metal key, you must go to the dealer...this is false! A vehicle security professional such UnlockItForMe locksmiths can easily reprogram or replace lost smart keys on the newer push-button, push-to-start vehicles. Having the keys to a 2017 Mustang or 2018 Ford F150 can cost you over $500 if you choose the wrong service provider. The dealership is simply one option for replacement smart keys, but certainly not the only choice. Our team of locksmiths is available 'round the clock in just about any place you can park. Give us a call! We won't leave you in the dark. 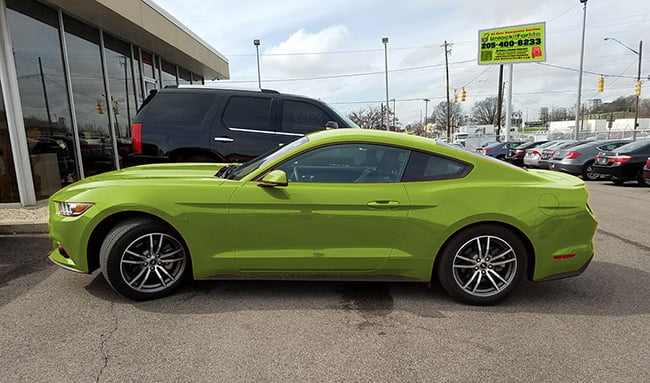 If you have inadvertently enabled the MyKey feature on your Ford/Lincoln/Mercury vehicle, you may have discovered what nightmare this novel idea can be. First, it's important to understand why the system was created. Therefore you should know the intentions were to enable parental controls of sorts. Our customers have encountered restrictions on vehicle speed, radio volume, inability to use the phone while driving, and being unable to turn on the radio without buckling up. As an adult and hopefully proficient driver, you can understand how this would be frustrating. Our team of locksmiths can come out to your location. There is no need for towing the car to the dealership. We can erase, reprogram, or add new keys to your vehicle at your behest. Don't let your car control you, call us today for a free estimate.

DOES MY FORD CAR OR TRUCK KEY HAVE A CHIP IN IT?

Most of the time, yes. Modern vehicles are equipped with anti-theft features. This is a tricky question for some folks. It can be hard both to explain and understand. There are a few reasons for this car key confusion. but We haven't quite pinned it down to one thing. We're not trying to mislead anyone, but the facts are facts. Many ford vehicles are factory equipped with immobilizer systems. So-called "run of the mill" Ford's as far back as 1999 may be equipped with a transponder "chip key". A chip key is a nickname for an automotive transponder key. Folks often confuse "chip" with circuit board-based remote head, fob-based, or smart keys. It's just a tiny specialist RFID chip, approximately the size of a Tic-Tac mint. We try not to argue, instead, we aim to educate. If you need it and don't have it, you are stuck.

Here is a brief list of vehicles that do include a transponder key, where folks often don't expect it.

When you need a locksmith in Alabama, you have to have one. Situations arise daily. If you need a locksmith to unlock the door of your Ford car or truck, rest assured we have you covered. Furthermore, in the event you need keys cut and programmed for Ford vehicles, we can handle it. If you break your key, we cut a new one. Some ford keys will seem to have lost programming. Many times we can reprogram the key. Additionally, a lot of people are unaware that locksmiths in Alabama can even sell and program newer keyless remotes. That's right. Vehicles equipped with push-button ignitions. Our locksmith team can program the Ford Smart Keys. Smart keys to push to start fords don't have to cost a car payment or two. Let us help you with your Ford locksmith needs. We take care of you from start to finish.

If you change the PCM in a Ford, you may discover the keys no longer crank the vehicle. This is normal. A locksmith will be able to reprogram the PCM so that the keys will work. There is no need to change the ignition of your ford due to the PCM replacement service. The PCM and immobilizer will need to be matched. UnlockItForMe's locksmiths do not perform the actual replacement, but rather work in tandem with the mechanic to complete the task. If your keys stop working and you have not replaced the PCM you likely have a different issue, perhaps with the vehicle's antenna ring which detects and decodes the signal from your transponder key. This will lead to a Ford with a theft light blinking rapidly. The vehicle will not crank with the theft light flashing. A damaged transponder chip or antenna is a likely culprit.

If you use it every day it's going to wear out. Just like the bottom of your shoe. Repeated use of a surface wears it down. What if your key turns just fine in your locks and ignition but won't crank? Electronics wear invisibly. Inside most car keys is a tiny radio chip. Over time the materials in this key can become weakened or broken from drops, heat, or continuous use. If you turn on the ignition of your ford, only to be greeted by a red flashing "theft" light, you need a locksmith. In most cases, you just need a new transponder key cut and programmed. However, in rare cases, more thorough repairs may be in order. If your antenna ring has stopped working, we will show you how we know. We carry special tools to test for the radio signals. Problems with your Ford Key? Call us.

Using the keyless Entry feature for a Ford F-150 or Mercury Mountaineer may be a convenient feature. However, if you forget your personal code it will be a challenge to enter your vehicle while not damaging it. There exist a couple of low-cost and simple ways to retrieve the 5-digit door code with no tools or automotive experience. Our team of locksmiths offers a cost-effective solution to acquiring the keyless pin code for your equipped Ford vehicle. This service is free with our key replacement and available as an add-on to our lockout service for car door unlocking. If the dealer or another provider has told you a high price for completing this service, please give us a call!

WE CAN PULL THE KEYLESS ENTRY CODE FOR MOST FORD VEHICLES

On Ford Vehicles Equipped with the door code entry system, drivers can simply unlock the car doors by using either the factory-set code or a pre-defined personal code and then pressing the button labeled |3 / 4| within five seconds thereafter. If one wishes to lock and secure the vehicle doors using the Keyless Entry System, this can be accomplished simply by pressing the buttons which are labeled |7 / 8| and |9 / 0| at the same time.